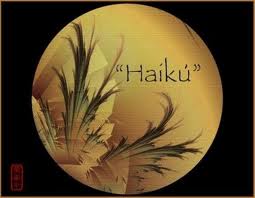 IT'S FINALLY HERE. I know you've all been waiting for this. I wanted to run this contest in April for poetry month, but with the A to Z Challenge, there wasn't time.

Write a Haiku about a book, email it to me so I can post it anonymously, come back on Friday and vote on which Haiku you like best. (julie at juliedaines dot com) Do NOT put your Haiku in the comments.


Anyone can enter. It would be nice if you followed me and/or help spread the word, but it's not a requirement.


Need a Haiku Refresher? (It's been a long time since 5th grade.)

Haiku is a traditional Japanese form of poetry in three lines, the syllables in each line are 5, 7, 5, respectively. I know that there are other forms of Haiku, but for this contest, let's just stick with the basics.

from the long hallways

voices of the people rise
in the morning haze
- Oshima Ryot

Your job is to write one about a book.

orphaned and alone
she rose to meet her dreams with
imagination

That was my 5 minute attempt at Anne of Green Gables. Ok, so I'm not a poet--that's why I write novels. But anyway, you get the picture. Include the title of the book you're Haiku-ing.

Entry deadline is Thursday, May 17th, midnight my time. : )

Voting will run Friday through Sunday, and the winner will be announced on Monday, May 21.