I want to wish everyone a Happy Thanksgiving this week.

I've always loved this Norman Rockwell painting. Freedom from Want. Look at those faces! I love it. A typical family with a typical thanksgiving meal, but they look so happy just to be together.

Sometimes we get so caught up in the little things, our pet-peeves and our grievances, that we overlook the big picture--our innumerable blessings.

So here's me hoping we all can find gratitude in our hearts this season to forgive someone we feel has wronged us, to smile and let go of any bitterness we may be harboring, and to dwell on the good in our lives.

“After a good dinner one can forgive anybody, even one's own relatives.”
― Oscar Wilde

“I celebrated Thanksgiving in an old-fashioned way. I invited everyone in my neighborhood to my house, we had an enormous feast, and then I killed them and took their land.”

"Not what we say about our blessings, but how we use them, is the true measure of our thanksgiving.” 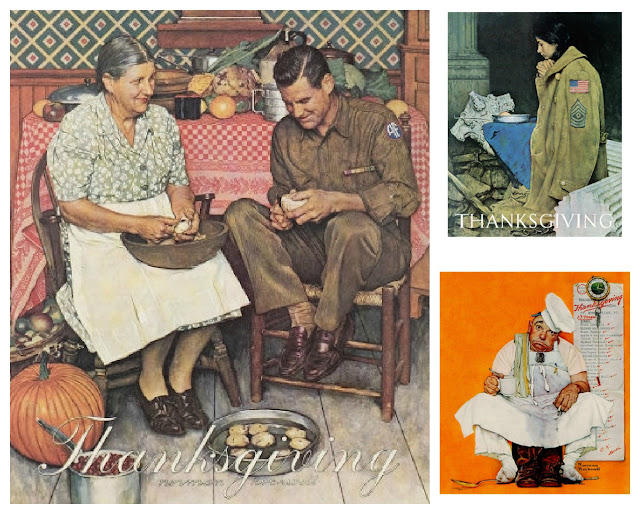 NaNoWriMo Success--It Can Be Yours! 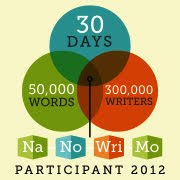 When it comes to NaNoWriMo, I'm a believer.

My first NaNo year was 2010. I did it. I wrote my whole novel in one month. Then I spent the next year revising it and running it through my crit group--the amazing Sharks and Pebbles. Then I sold it to a publisher and it's coming out in February.

I am a SLOW writer. If I can do it, anyone can!! You just have to find the NaNo method that works for you.

So, in case anyone out there finds this helpful, here are some tips that work for me:

~ Some great advice I picked up I can't remember where is to take the first 5 minutes of each NaNo session and brainstorm a few BRIEF bullet points of what needs to happen in your plot next. You only need to worry about the next scene or two. Once you have that, it's A LOT easier to get those words out.

I'm not much of an outliner in general because things change so much as I write. But if I take these 5 minutes to plot out the near future, it makes a huge difference in how quickly I meet my daily goal.


~ DON'T SELF EDIT! Everyone says this because it is the hardest rule to stick to. If you feel you've written something awful or derailed the plot, just strikethrough those paragraphs to remind yourself you hate them, then move on. That way you still get the word count, and if you change your mind later and decide keep them, there they are!


~ Keep your fingers on the keyboard! It's so easy to simply stop typing and lean back to think, or check Facebook or twitter, or go get a snack. Resist! Keep those fingers on the keyboard and type away. If you're not sure what comes next, just keep typing the scene you're in, even if it will all be deleted later.

I had a scene where my two main characters were eating, but I wasn't sure what needed to happen next, so I dragged out the meal, describing in detail the most mundane parts about their burgers and fries. It kept me writing until the inspiration on how to move on finally came. NaNo is an exercise in free-flowing thought, not creating a masterpiece in one month.


~ Find what motivates you. For me, it's watching that little target bar in Scrivener slowly change from red to green.

Happy writing!
Posted by Julie Daines at 8:44 AM 5 comments:

I'm excited today to offer my review of Stephanie Black's latest novel, Shadowed. Stephanie is a four time winner of the Whitney Award, and it's easy to see why.

From the back cover (condensed):

Gifted musician Catherine Clayton was born into a life of wealth and privilege. Now, she’s using the family money to establish a music school and offer free lessons to the underprivileged. Catherine selects Riley, New York, as the perfect location for her new school.
Two years ago, Riley was rocked by the brutal murder of elementary school secretary Olivia Perry. Her murder remains unsolved. Catherine receives ominous warnings that Adam Becket is responsible for her death. Unimpressed by the lack of evidence against him, Catherine is drawn to the shy but endearing Adam. When death threats prove the killer is back--and mark Catherine as the next target--Catherine wonders if Adam could really have been involved in Olivia’s murder.

Shadowed is loaded with great characters, suspense, and just the right amount of romance. Stephanie Black is a master of keeping the reader guessing right up to the very end. Her characters have depth and believability, and her writing style is clear and easy to read. You get drawn into the story and it's hard to put the book down until you reach the exciting conclusion.

The protagonist, Catherine, is strong and smart, but because of her privileged life she's also a little naive. Her personal struggles and flaws bring a nice realness to her character. Adam brings a starkly different element to the story as the man accused of murdering Olivia. I loved the way he dealt with those accusations. The setting of Riley, New York really took on a personality of its own.

I have so many favorite parts and plot twists I want to mention, but I can't because it would be a spoiler. You'll just have to stop by Amazon or Deseret Book and get yourself a copy. Then, let's talk!

Anyone who enjoys a good suspense novel along the lines of the Mary Stewart classics will love Shadowed.

On a completely unrelated note:
I can't let November 5th pass without saying Happy Guy Fawkes Day! Did you know that some people believe Shakespeare was also involved in the Gunpowder Plot?