Like many authors, I have a playlist that inspires me and helps me tell my stories. I don't know why music seems to be such an integral part of a writer's muse.

So, for fun, and while we're waiting for the unveiling of the Book Trailer of Awesomeness (coming April 2!), I'll share the songs behind A Blind Eye.

Welcome to My Life
-Simple Plan

Open Up Your Eyes
-Tonic

Waiting for the End
-Linkin Park

On My Own
-The Red Jumpsuit Apparatus

Right Before My Eyes
-Cage the Elephant

Hear You Me
-Jimmy Eat World

They're all on this youtube playlist, and if you click on the little "playlist" icon at the bottom of the video frame, you can pick and choose which ones to listen to.

On Thursday this week, I'm giving my first presentation to a group of aspiring authors. I can't wait. As my daughter would say, it's going to be epic.

I'm planning on sharing things that I learned on my journey to getting published that I wish I would have known sooner, including some time saving tricks and general habits to make writing easier and better.

I would love any ideas from my blog readers on their best piece of writing advice. It can be about any part of the writing process.

So, if someone asked you for your one most important bit of writing advice, what would it be?

Or, if you're a reader not a writer, what is something you wish writers would do--or not do?

Any advice is welcome.

How Long Should It Take to Write a Novel?

I've seen a lot of blog posts recently with writers complaining about how hard it is to find time to write, or how they've been working on the same story for YEARS and just can't quite get it right.

Here are my thoughts on that subject:

EVERY writer struggles with those same problems.

SUCCESSFUL writers spend less time complaining about it, and instead, learn how to FIX IT.

The reality is that if you are serious about getting published and being successful as an author, you have to figure out what areas you struggle with, and fix them.

When an agent or editor calls, interested in your manuscript, you can bet they will be asking some probing questions. "How long did it take you to write this story?" "What else are you working on?" "Do you have other manuscripts completed?" They don't want authors that can't get the writing done.

Take a step back and look at your writing life through an objective lens. What is it that's holding you back? And how can you fix it?

Bogged down trying to get your story just right? Find a good critique group--and LISTEN to what they say. Move on. Maybe that story just doesn't work and it's time for something new. Set rules about how much time you can spend editing each day--maybe only allow yourself to re-read the one page previous to where you left off. Five minutes tops.

Embarrassed by a hideous first draft? Welcome to the world of writing. That's why I prefer the term rough draft.

Discouraged by negative feedback or a lot of critique from your writers group? Step away. Let their comments percolate. They're not trying to be hurtful, they're trying to help your story. EVERY writer--no matter how good--can still improve. If you need warm fuzzies, ask your spouse to read it and have them tell you only the things they liked.

My point is, to be successful in this business, you have to be able to get the manuscripts written. Written, polished, and ready to go.

Figure out what's holding you back, and FIX IT.

DON'T compare yourself to other authors, you aren't them. Experiment, learn, and find out what works for you.

This weekend, we filmed the book trailer for A BLIND EYE.

There is so much to say about it, I don't know where to begin.

I'll start by saying this whole filming thing came about when this awesome and amazing cinematographer married into the family--Paul. If you want to see some of his work, go to his website and check it out. I especially recommend the History Channel one--with the old guys and guns.

When he said he would help me do a trailer, I had no idea that we would be shooting a real piece of film. This was big time stuff, in my opinion. Real actors, real movie-making equipment, even a stunt driver and weapons specialist!

Since we didn't have a real Hollywood budget, we used a lot of friends and family. My son was on dolly, I helped with the directing, my sister in law did craft services, and my nieces did the fake blood, set dressing, take-marker clacking, and my sons and nephews and husband moved tons of equipment, lighting, props, dolly tracks, fog machines and light reflectors. Whew! It was a crazy weekend!

I don't have all the stills and behind the scenes photos yet from the official photographer, but here are a few I snapped with my phone. 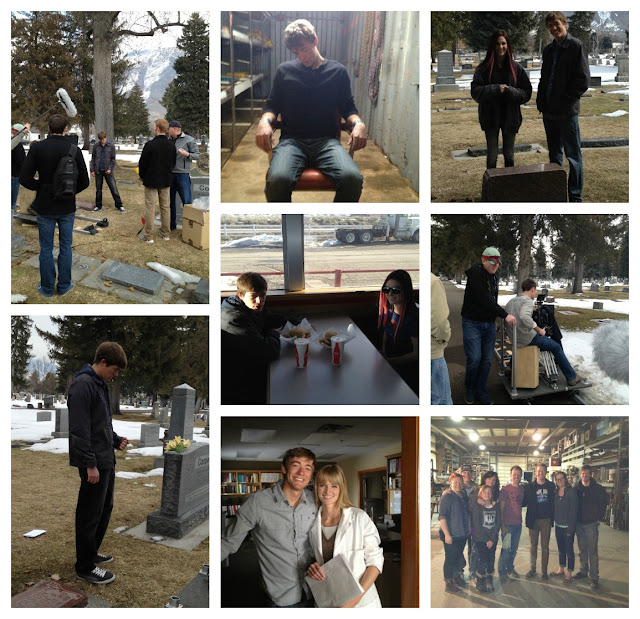 As soon as I get more stills, I'll put them up. And then hopefully we can expect to see the trailer in a few weeks.
Posted by Julie Daines at 11:16 AM 6 comments:

All the details are HERE.