Sadly, this is a freedom our children may not enjoy for long in their lives. Innocence is stripped from them at an increasingly alarming rate. My heart goes out to all those affected by the senseless events in Connecticut--and especially the families of the victims.

Everyone is desperate to find a solution--a way to stop things like this from happening. I wish I had an answer, but I think there will always be evil in the world. Unstoppable and uncontrollable evil.

What I would love to hear from you readers, are your thoughts on how we as parents, teachers, and adults can help our children have a life with Freedom from Fear.
Posted by Julie Daines at 8:42 AM 6 comments:

At last I get to reveal to the world my book cover! I'm so happy with how it turned out. It's perfect for the book. Hats off to my publisher's design team!


Seventeen-year-old Christian Morris decides the only way to save himself from his father's neglect is to run away from home. On his way out of town, he finds a stowaway hiding in his car—Scarlett, who has been kidnapped from London. Blind since birth, Scarlett has developed a sixth sense: she dreams about someone’s death before it happens. And now, she has dreamed about her own.
Christian’s attempt to leave home turns into a race to save Scarlett from death by scientific experimentation. His growing relationship with the girl helps him to look past his own blindness and confront the truth about his father. But first, he must find the kidnappers before they can get to Scarlett.

Earn brownie points AND good karma by spreading the word. Tweet and Facebook and send people this way. I will always return the favor.
Posted by Julie Daines at 6:00 AM 16 comments:

How Do You Feel about Love Triangles 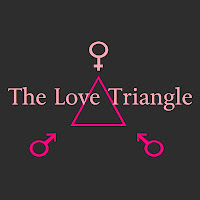 All, right. Let's get right down to it. In YA literature, love triangles are everywhere. Example from Twilight: the Edward-Bella-Jacob triangle.

I want to know how you feel about love triangles. Do you like them? Hate them? Don't really care? Depends on how it's written?

As a genreal rule, I don't like them. I don't mind so much if it's simply a case of two people liking the same person. Two boys like the same girl. What I hate is when that one person strings along the other two.

I have to fall back on the Twilight example. Bella likes Edward, and she seems set in her feelings towards him. But she also sort of likes Jacob, even though she claims there is no chance she'll ever end up with him. Instead of cutting him loose she strings him along. We see this kind of thing all the time in YA lit.

I think the reason I can't stand this type of scenario is because it makes the character doing the stringing appear unfaithful, cruel, and selfish. Why would either of the guys put up with that? The story loses credibility and my sympathy for the characters.

What are your thoughts on the love triangle?
Posted by Julie Daines at 9:35 AM 7 comments: