A Better Way to Show

I've been reading about my favorite subject lately, imagery in literature, and I keep coming across the term objective correlative. As I delved deeper, I realized that was exactly what my current work in progress is missing.

Objective correlative is a term coined by T. S. Elliot. He said:

The only way of expressing emotion in the form of art is by finding an "objective correlative"; in other words, a set of objects, a situation, a chain of events which shall be the formula of that particular emotion; such that when the external facts, which must terminate in sensory experience, are given, the emotion is immediately evoked.

What does that mean? Essentially, an objective correlative is a type of metaphor where certain symbols or objects are used to express or allow an understanding of usually incomprehensible emotions or feelings.

In our current world of show but don't ever upon penalty of death tell, it's easy to get bogged down in trying to describe the physical traits of sadness, regret, nostalgia, etc. Tears, a sinking feeling in the stomach, furrowed brow--these are all becoming cliche. So how do you show what your character is feeling without being cliche?

Objective correlative! Here are some examples:

I just saw the movie The Eagle wherein a young man wants to redeem his father's name and restore honor to his family. As a child, his father gave him a carved amulet of an eagle--symbolic of the great golden eagle standard and of his father's honor and love. When the audience is meant to feel the main character's desire to recover his family's honor, he fondles the amulet and immediately we know what he is thinking and feeling. The eagle amulet is an objective correlative.

In one of my earlier novels the main character feels tremendous guilt for the death of her boyfriend in a car accident. She has a scar from that accident, and when I want to show that she is feeling shame and guilt because of what she did, all she has to do is reach up and try to cover her scar. The act of covering her scar is an objective correlative.

In Lord of the Rings, Aragorn is conflicted about his place as king. He feels unworthy because of the treachery of his ancestor, Isildur, who kept the Ring for himself instead of destroying it when he had the chance. Aragorn worries he will also become weak and susceptible to similar corruption when faced with an opportunity for power. All the audience needs to see is a quick flashback of Isildur's treachery to know exactly how Aragorn feels. That quick glance to the past is an objective correlative.

So when my critique group told me my main character was too whiney in my last chapter. That's when it hit me, he doesn't have his objective correlative yet. He needs that symbol to show without telling exactly how he feels.

After all, a picture is worth a thousand words. In literature, an objective correlative is just a written picture.
Posted by Julie Daines at 12:09 PM 5 comments:

Quote of the Day: "Womble up the rubbish, put it in the bin." ~my Womble pull-string toy.


I was digging around in my parent's basement the other day and found one of my oldest, favorite toys. A WOMBLE!!

What is a Womble? It's a plush toy based on a old stop-motion TV show from Britain that aired in the mid-70s. My guy's name is Orinocco. 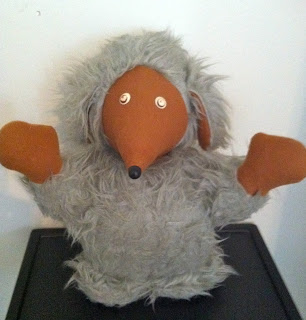 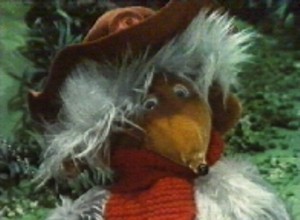 The Wombles live on the Wimbledon Green and collect old rubbish and stuff and use it to go on all sorts of crazy adventures. I got my toy when I lived in London in 1978 (ish). He has a pull string that no longer works, but I remember two of his phrases very well. My favorte is the quote of the day, and the other one is "Womble days are happy days."

I logged onto You Tube and found a few episodes. After watching two of them I thought, children's TV has come a long way. Then I remembered the Teletubbies and realized it hasn't changed much at all.

Quote of the Day: "Life is nothing but a test, of your adventure skills." By my nine-year-old daughter.
Gulp. The first chapter. So important but so tricky to get right. Well here is a little bit of advice that might help.
The five W’s of perfect beginnings:
Who – establish the main character and at least one important thing about him/her that will help the reader identify with and care about him/her.
When – a sense of time. Don’t leave the reader guessing—it frustrates them.
Where – a general idea of the setting as seen through the eyes of the main character.
What – What is the problem of the story. The main problem should be established early on because it sets the tone for the whole book.
Why – Why does the story start here. Why is this day different from any other. What is the inciting incident.
For more advice on writing the perfect first chapter, see my post at Utah Childrens Writers.
Posted by Julie Daines at 9:49 AM 3 comments: